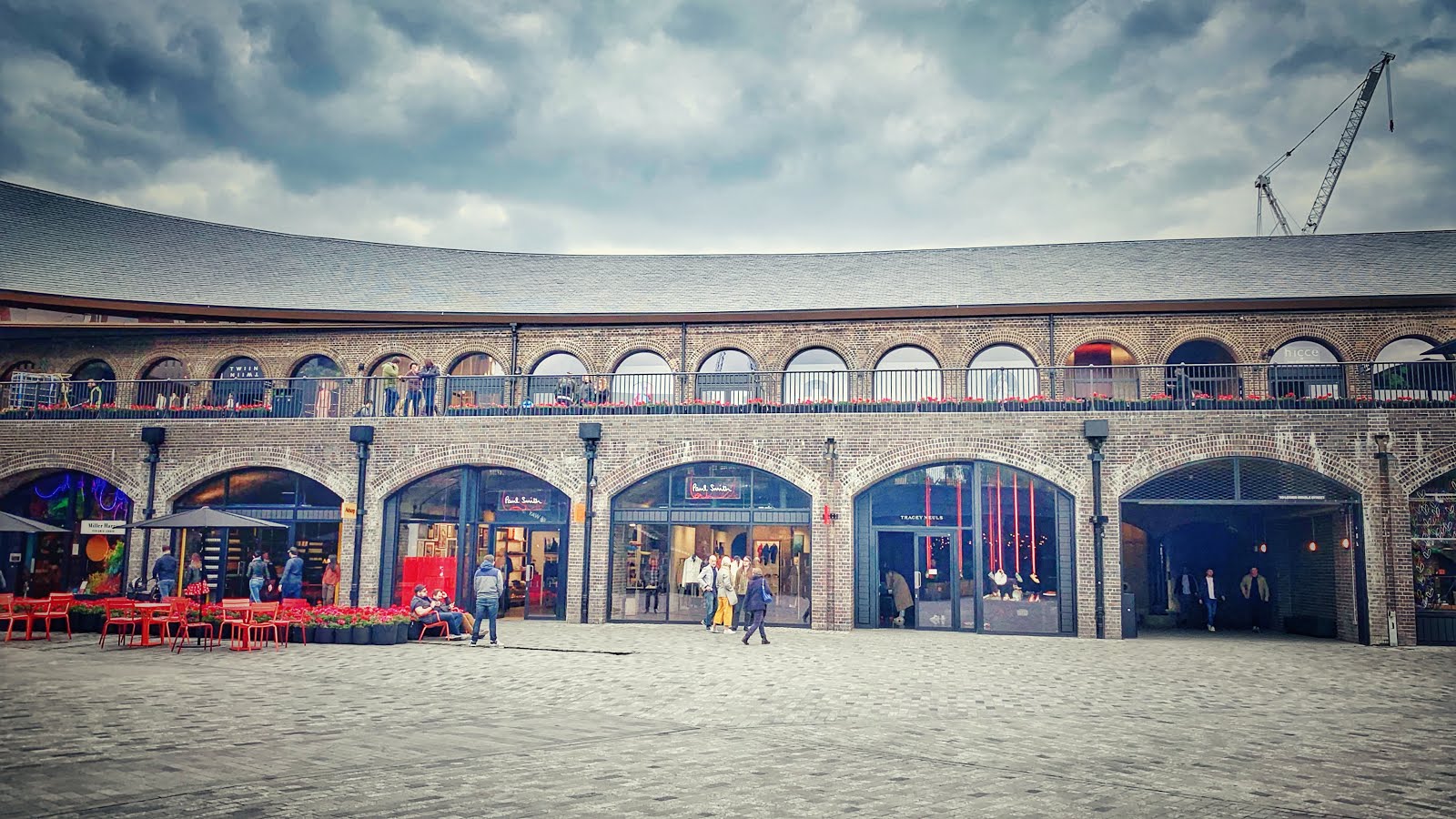 London has changed aplenty during my lifetime. Parts of the capital have been utterly transformed. Mostly for the better? That depends on who you ask and which part of the city you are referring to. It's a big place. Great swathes of the centre have undergone a process known as gentrification. Balham in the south, for example, where I lived in the late 1980s. And its neighbour Brixton. When I was in residence, if being kind, one would have described Balham as having character.

If pushed, but remaining diplomatic, one would have described it as gritty. Between friends, one would have labelled it with more vulgar Trumpian language. As for Brixton, for most of the last two decades of the 20th century, the area was still best known for some of the the worst rioting London had ever seen. But times change. They have become smart, trendy places with a vibrant cultural  scene and skyrocketing property prices. 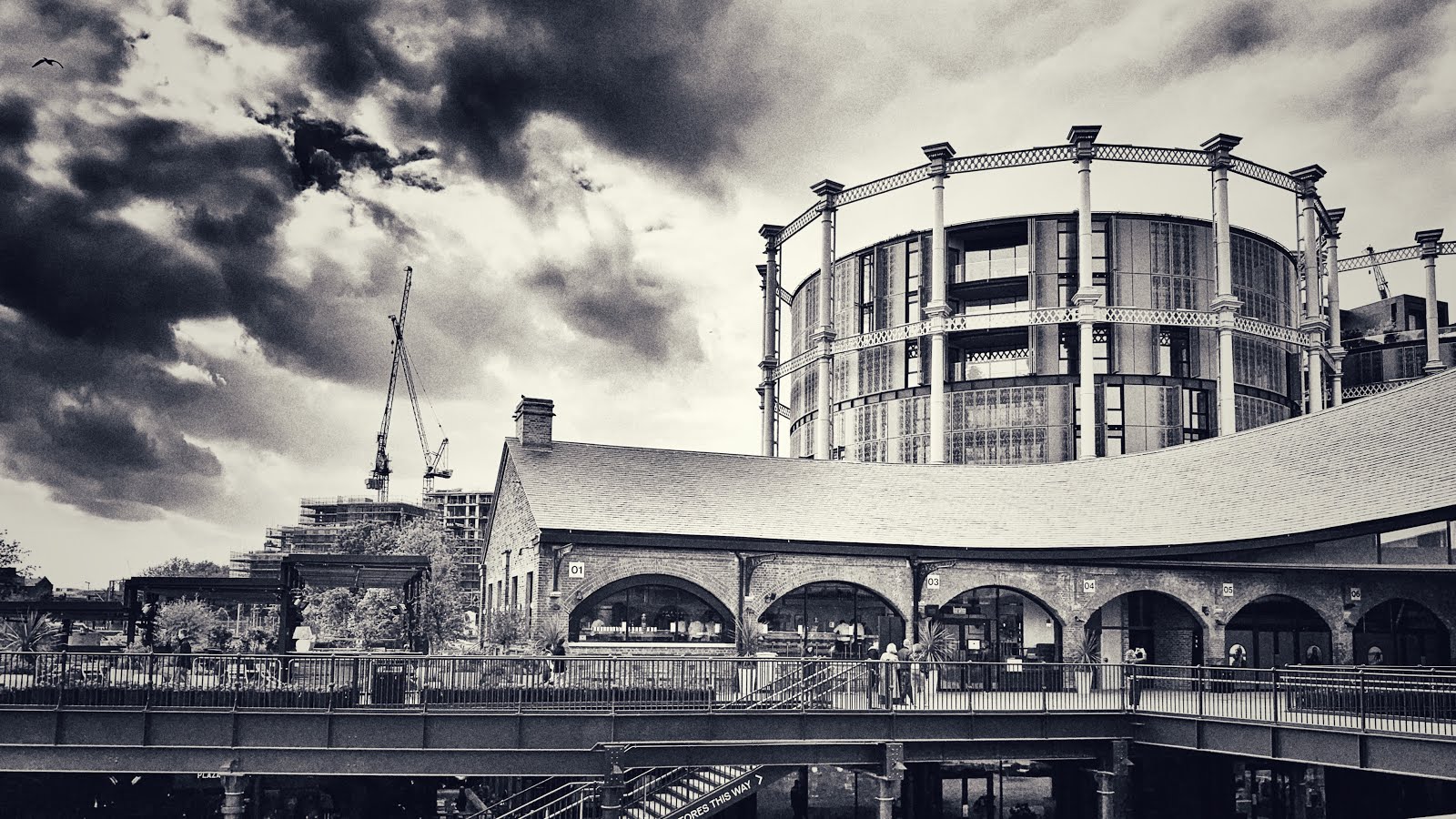 Then there's Kings Cross, the raison d'etre of this post, and a 'hood that Mrs P and I visited at the weekend. Twenty years ago, visitors to Kings Cross arrived for one of three purposes. To catch a train from either Kings Cross or St Pancras to elsewhere in the country. To engage the services of a cheap street hooker. Or to consume ecstacy and other illicit drugs whilst raving the night away at Bagleys, a night club set up in one of the disused railway warehouses.

Nowadays, one can catch trains not only to elsewhere in the country, but to the continent too, courtesy of the Eurostar services. The unwashed ladies of the night have been banished from the streets, replaced by expensive escorts advertising their wares online. The last of the nightclubs shut down in 2007, as the grand redevelopment project began.The huge Grade II listed gasholders? They've been given a lick of paint and filled with pricey flats. 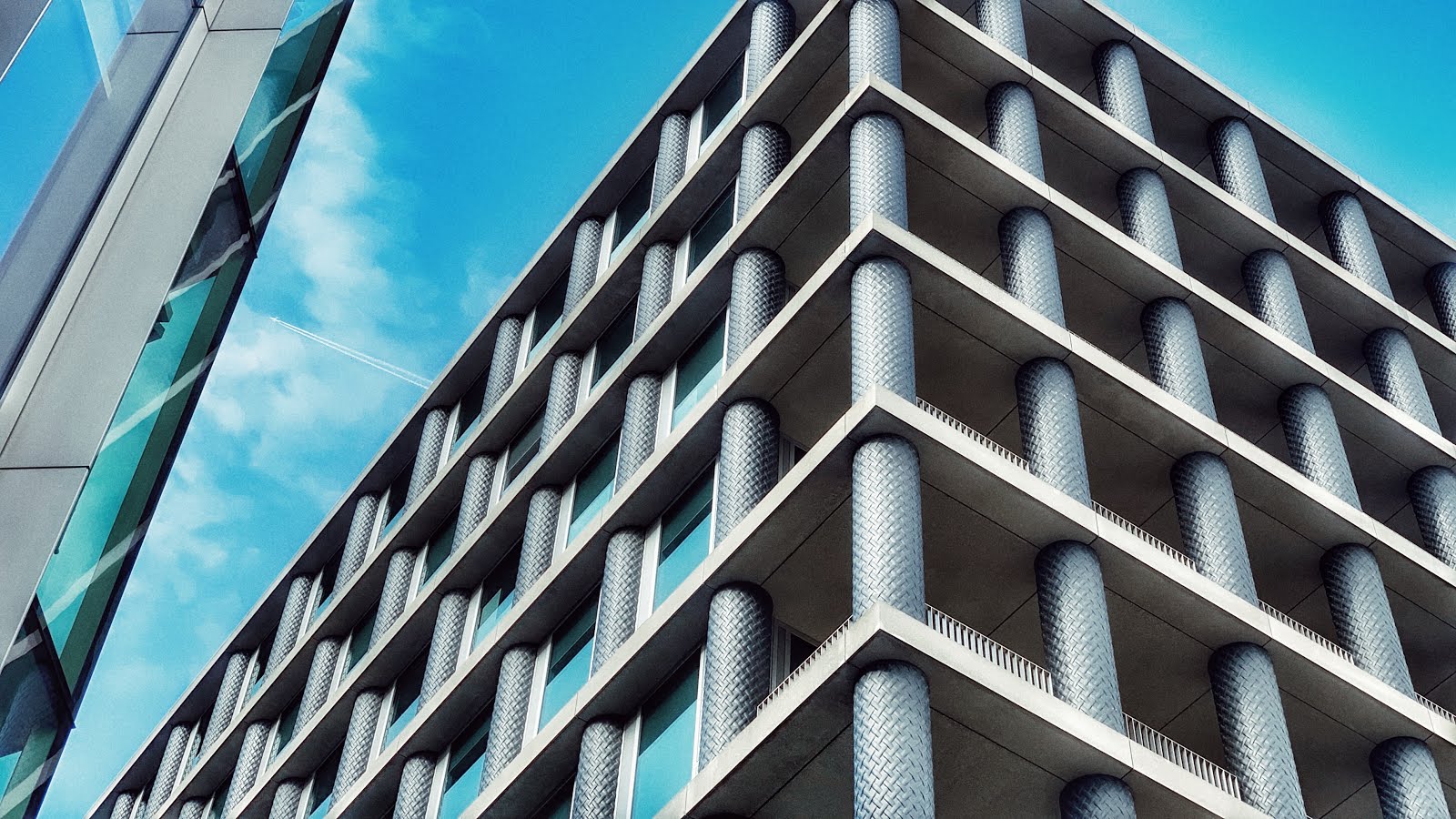 And, of course, there's a substantial area set aside for retail outlets and dining options in this prestigious N1 postcode zone. Granary Square opened a few years ago. Coal Drops Yard opened recently. The redevelopment is a clever use of modern design and planning to retain much of the old historic brick built warehouses alongside the new constructions and keep the industrial atmosphere alive and kicking into the 21st century.

Unlike other gentrified parts of London, the shops and restaurants you'll find here will not include the likes of Prezzos, Olivier Bonas or Waterstones. Nor will you find any quirky, arty independent stores selling cheap tat. There is a Waitrose. Naturally. Granary Square and Coal Drops Yard are filled with high end stores selling high end goods at prices that only the nobility of the land could possible afford. Aesop sell a range of skin care products that will make your eyes water. A kitchenware store stocked a vast array of lethally sharp, ornate knifes, meat cleavers and axes. The display would make a murderous Saudi jihadi giddy. 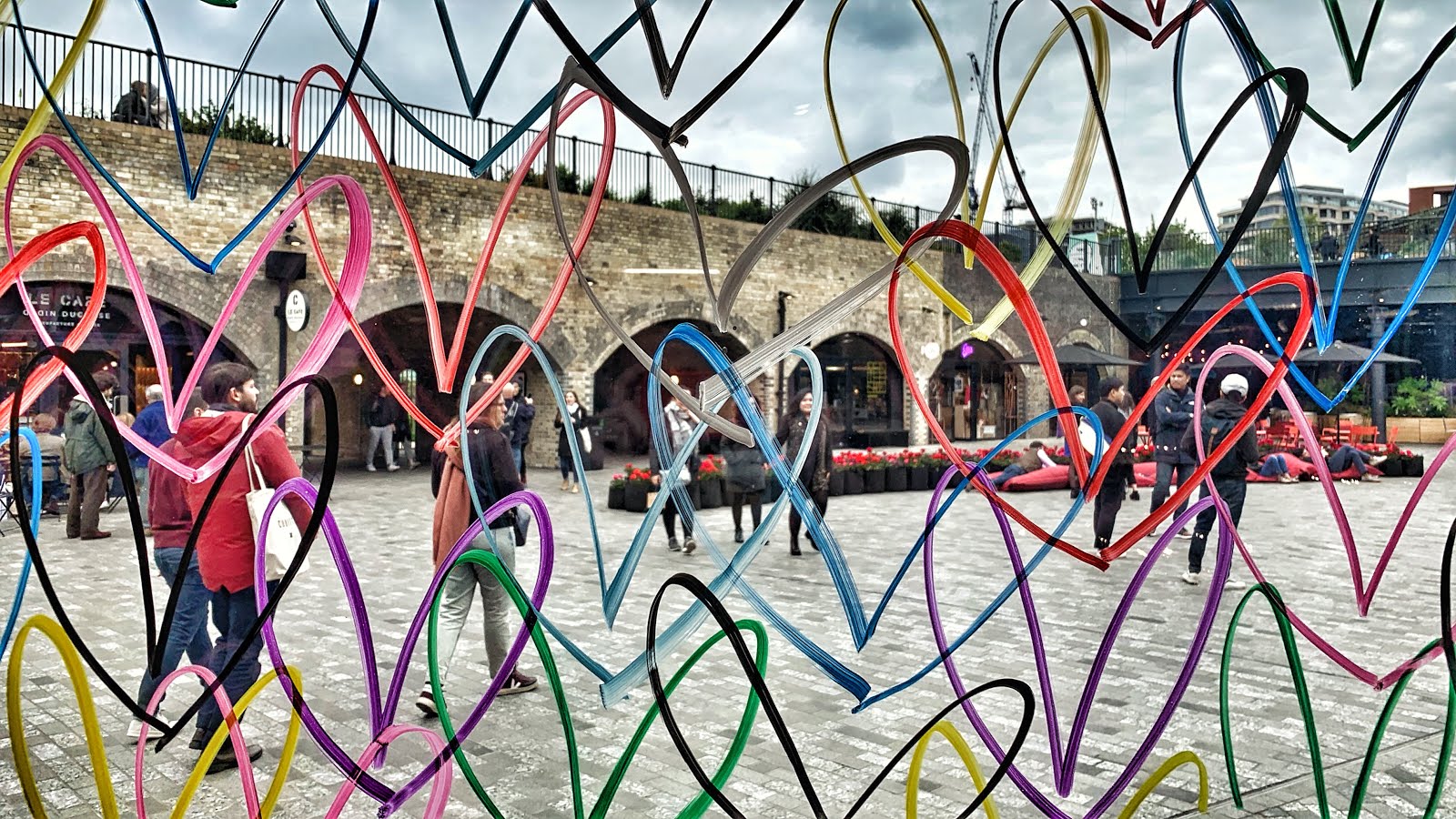 A luxury chocolatier sells the most exquisite bars and jars of the good stuff. But what might cost £1 elsewhere costs 10£ here. Perhaps a scientific consumer study has shown that the incorrect positioning of the pound sign will make the price easier to swallow. I settled for a free sample. That went down nicely. Next door is a homeware store that sells the most fabulous set of copper light shades, polished so thoroughly that you can see your reflection in them. If that reflection displays anything other than a gentleman in top hat and waistcoat with a man servant by his side, then you can't afford them. Sorry. Welcome to the Lordification of London. Gentrification is just so last decade... 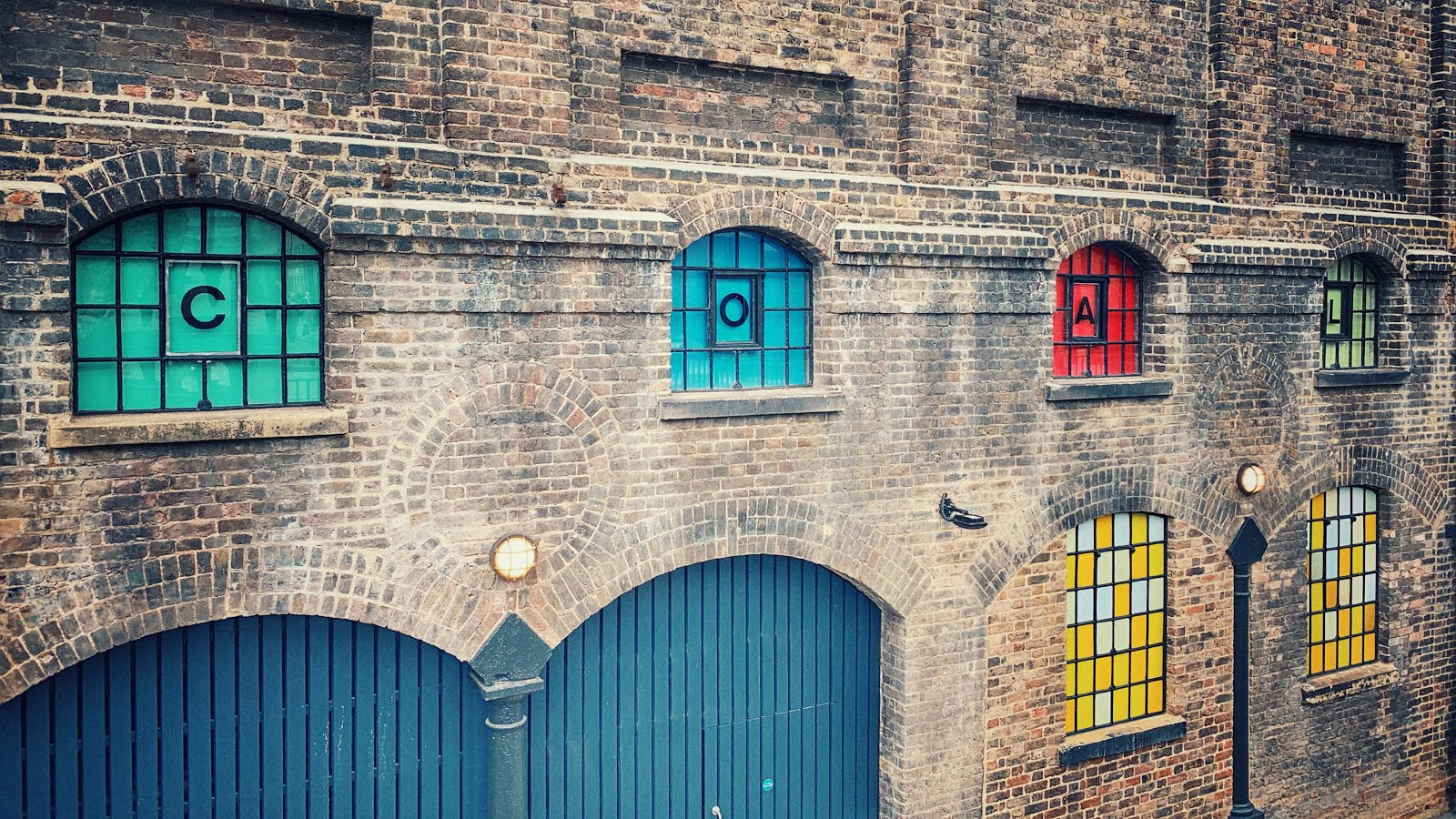 The dining options we looked at, however, were priced with the clear intent of appealing to a wider economic range of  clientele. We chose a suitable establishment, took our seats and prepared for a pleasant Sunday afternoon feast. With the date being 5th of May, there was only one establishment that we would consider suitable. A Mexican. To our delight, it turned out to be an authentic Mexican restaurant, selling barbecoa rather than burritos. With a mariachi band. An all female band, which was something of a novelty. The food was good. Very good. We'll go again.