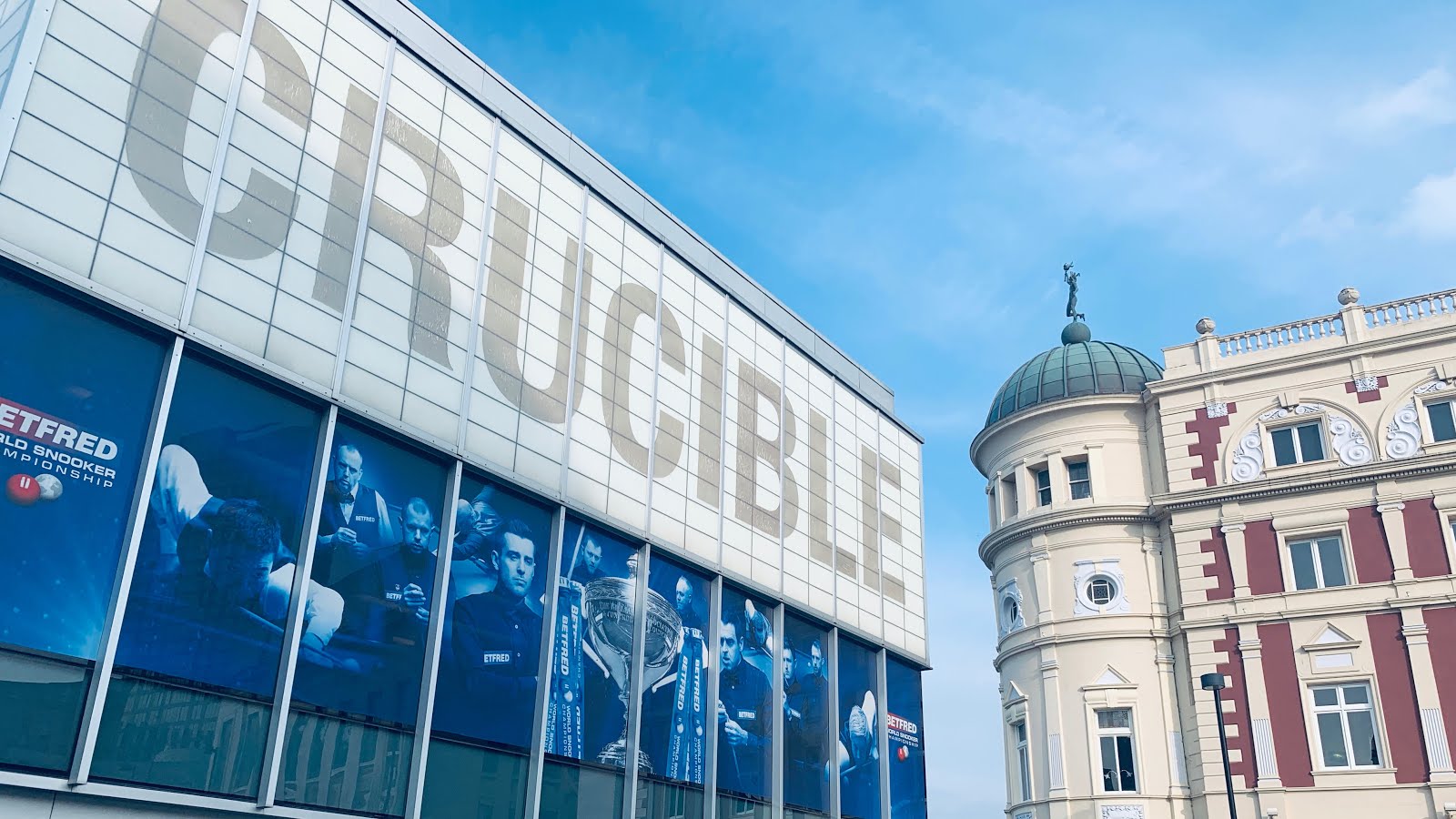 This week I have ticked off an item on my bucket list. It’s not a terribly long bucket list. And truth be told, my bucket list is much like the British constitution - unwritten and largely made up as one goes along. Items are added and removed at the whim of the part of my brain responsible for remembering such trivialities. Anyway, I’ve always thought of bucket lists as the sort of thing for people who’ve just had a spot of bad news from their doctor and have an unexpectedly sudden and urgent need to get on with the fun things in life. I’m in good health, as far as I’m aware, so there’s no need to jot down a definitive list with pen and paper just yet.

But there are a few items worthy of inclusion on this notional list of mine. It contains the sort of things that I’d really quite like to do but are a bit of an aggravation to get done. Which is largely why they tend not to get done. But this week I’ve shown a little bit more determination. I went to see a session of snooker at the World Championships in Sheffield. 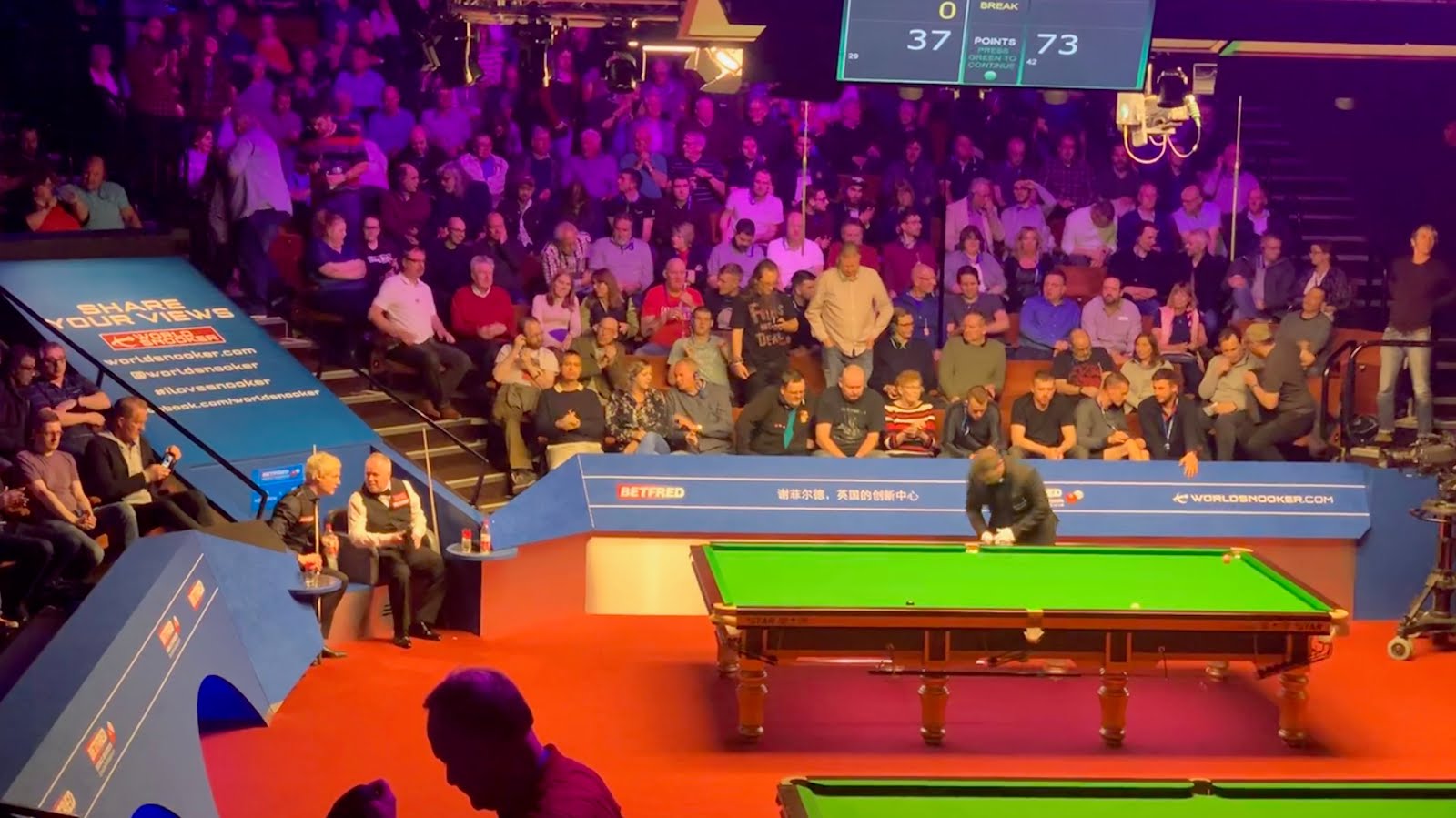 Where’s the aggro in this, you you might ask? Well, getting a ticket for one. You have to buy it a year in advance, and to be quick about it. Snooker has a small but mightily enthusiastic bunch of followers and the venue for the three week tournament holds less than a thousand spectators. If you snooze, you lose. Then there is the getting there and back, which involves a ten hour round trip on the train from Bournemouth to Sheffield. And how many people would wish to spend ten hours on a train in a single day? Actually, you’d be surprised - there’s plenty. But I’m not one of them. Which is perhaps why the years of intending to go have turned into decades of ‘not going’.

Nonetheless, this year I got it done. At a cost of about £100 all in, and with enough sitting down to provide my derrière with a taste of the rigor mortis that will eventually come when I do have that disappointing news from my doctor. I took my seat at the Crucible theatre to watch two grown men bash 21 coloured balls around a green clothed table with a pair of think sticks. Except....I didn’t. I sat down to watch the back of a giant man’s fat, view-blocking head. Behind which, out of sight, a game of snooker took place. 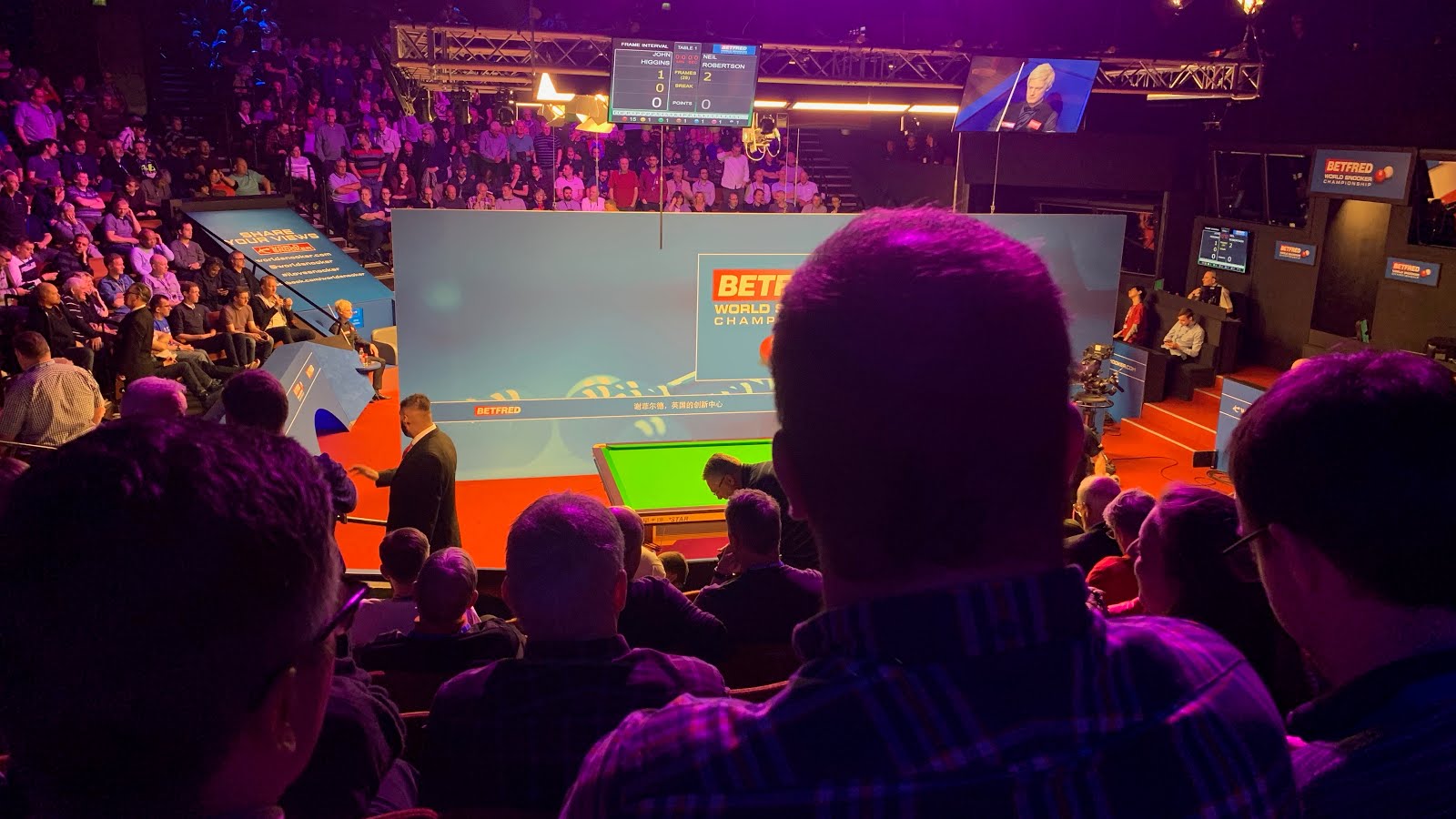 Sadly the greatest aggravation about the whole trip was something I hadn’t given any thought to at all. But even if I had, what could I possibly have done about it? I can choose my seat. But I can’t choose who gets to sit in the seats in front of me. Oh, how I yearned for the good old days, when I lived in Mexico and was guaranteed an excellent view over the sea of three foot tall munchkins between me and the stage.

One would really think in this day and age, at a time when passports are being rendered obsolete by facial recognition technology, that there would be a better way to fill a theatre. Something akin to a human version of the coin sorting machines at a supermarket, where you pour a jar of assorted change that you've been collecting into a slot, to exchange for a shopping voucher. 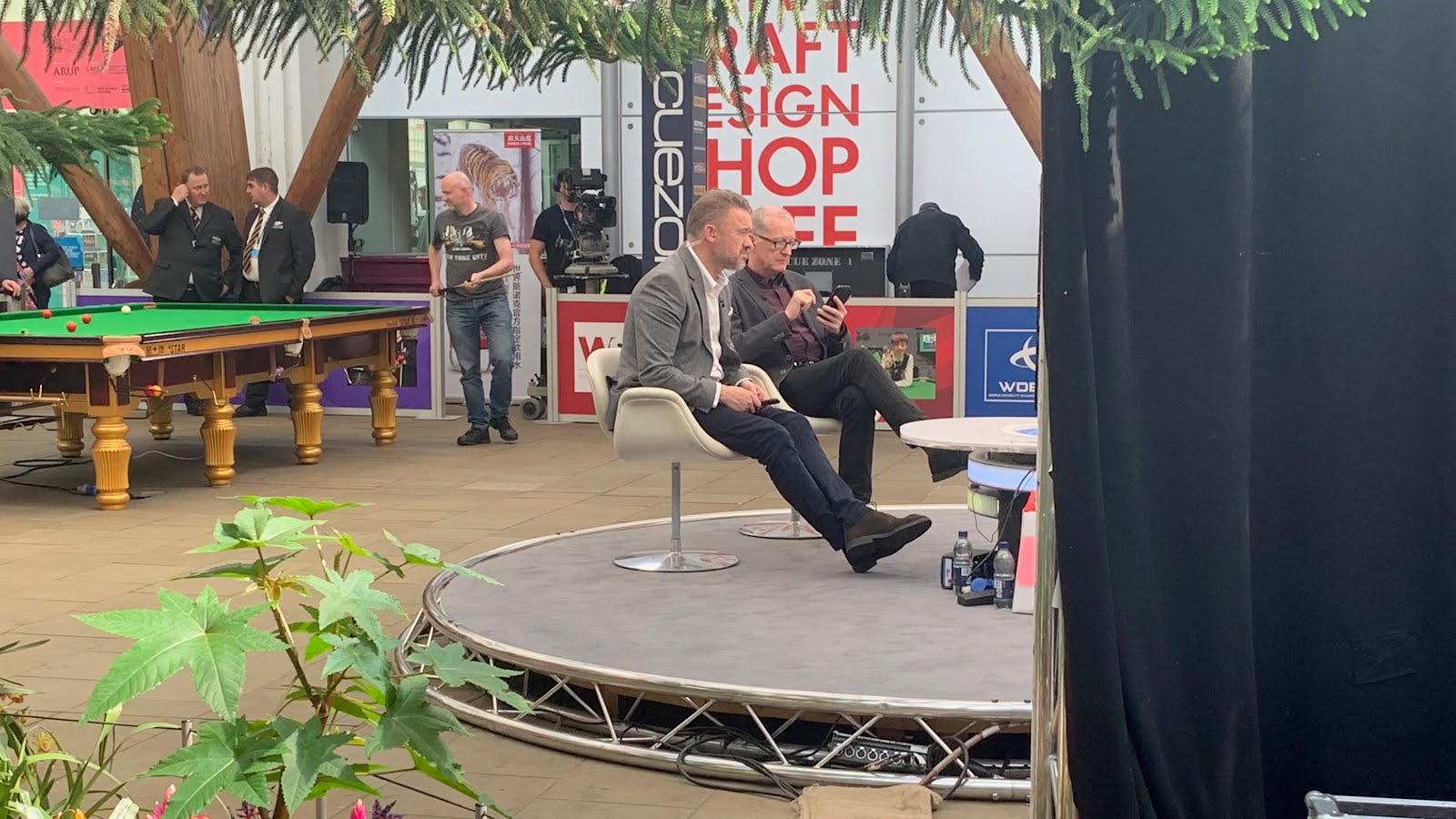 I'm envisioning a scanner at the front doors. Something that sizes everyone up as they enter. Casting a suspicious electronic eye over the punters. And then feeds the results into some clever software to allocate seats according to each persons physical proportions, and charges supplements as necessary. Mr Gigantor? Row Z, seat 56. Mrs Fatty McTwopies? We've got seats with extra width over there in Row H. Yes, they are twice the price, but you are bringing double the arse to the party, aren't you.

Ah, you there sir. With the bald head. We're just going to move you a couple of seats along, away from the overhead light. There's a good chap. We don't want everyone blinded by the reflection. If the system were really clever, it could even weed out those persons whose 'tickly cough' sounds more likely to be late stage emphysema, and find them a seat in the basement. 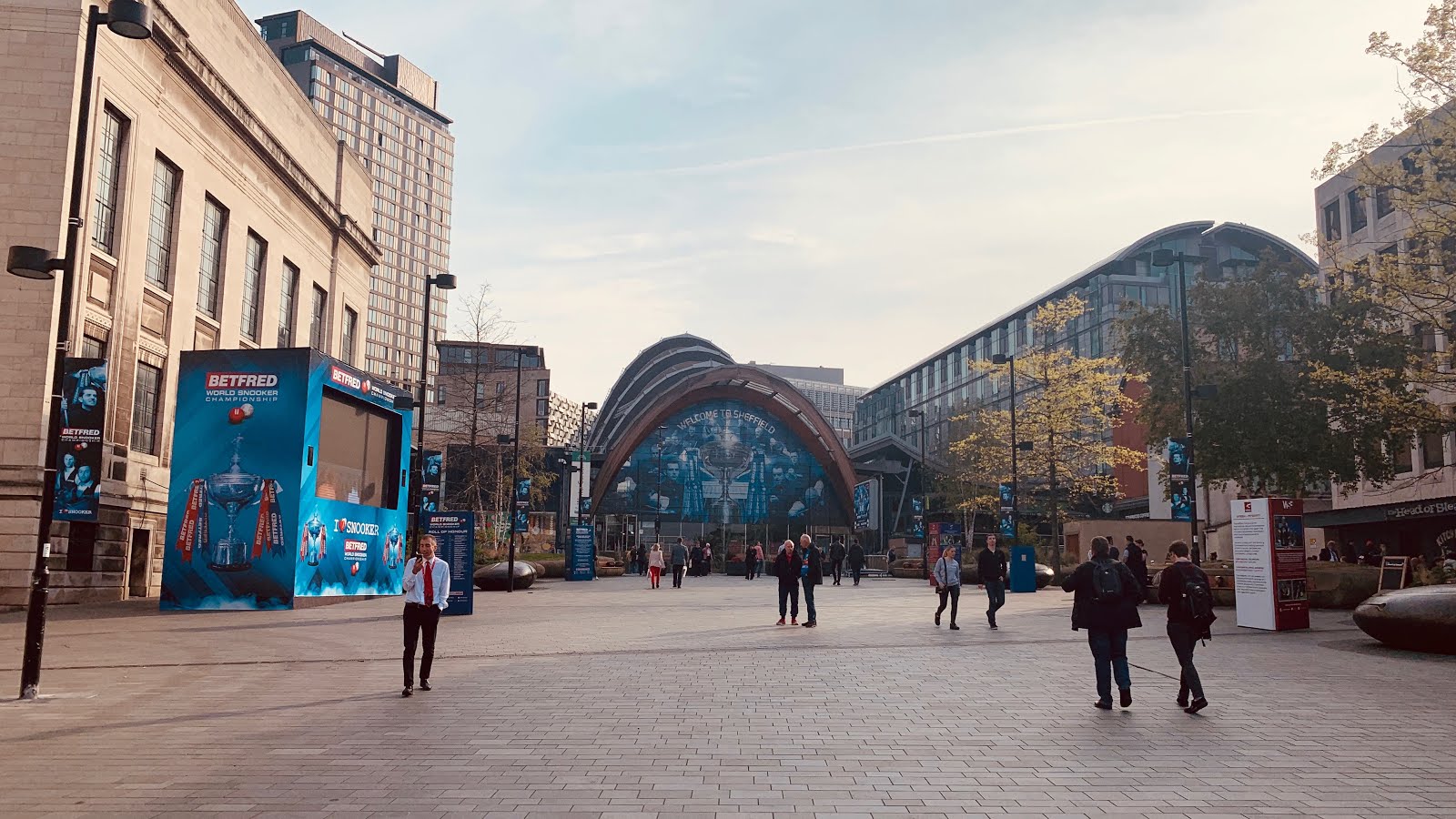 There's only one downside to this cunning plan. At six foot three inches, my lofty frame will be sent to the back row every time. But if that is the price to be paid to be able to see anything at all, it's a price worth paying. I look forward to the day when everyone is allocated the seats they need, rather than the seats they want. Bring on the revolution.

As for my rather lengthy day trip. Sheffield was quite pleasant. There's a nice shop selling Portuguese pastries. I saw Steve Davis and Stephen Hendry in the Winter Gardens. I watched, as best I could, Judd Trump demolish Stephen Maguire in double quick time. So quick, the partition was lifted so that I could enjoy the remaining three frames of the session on the far table between John Higgins and Neil Robertson. Will I return? I'd like to. The Crucible is a special place for a snooker fan. But there is no longer a bucket list obligation to do so.