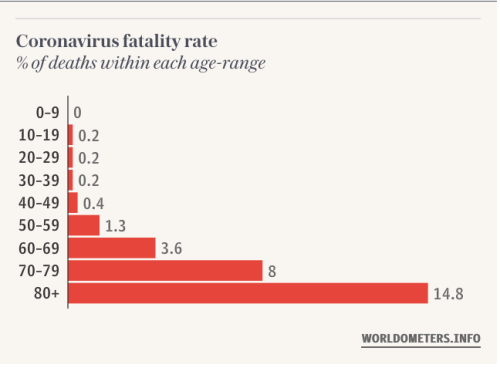 It’s permanent, isn’t it? I think a lot of people are missing the big point about the switch from containment to delay. The failure of containment means Covid19 is with us permanently. As the years and decades pass, this is likely to kill millions. Tens of millions. Maybe hundreds of millions.

I keep hearing people comparing the number of daily Covid19 deaths  to other causes of death, trivialising the disease somewhat. Imagine a person standing in the path of a tsunami, as the wave makes first contact with people on the beach, suggesting that as only a couple of people have been killed, there are many other things we should really be worried about.

When a vaccine is developed, will it be as effective as the smallpox one and eradicate the disease? Or will it be similar to the flu vaccine and just help keep the disease in check?

Mortality rates are high given how contagious the disease is. Really high for the over 80s at 15 to 20%. But what I wanted to know, is how high they are for my age group. It turns out that it’s a reassuringly low 0.4%. I’m real glad I quit smoking last year though.

Covid19 has come to my town. Three confirmed cases so far. I walked past Clarks in Poole on Monday and was surprised it was closed. It turns out one of the staff has it.

Mrs P works for a large US corporation. They have been edgy about the virus for weeks. An infected person walked in for an interview a few days ago. They are now terrified.

If I am going to get the virus, I’d like to get it now. To be one of the early cases, before the ICU beds fill up. It’s unlikely I’ll need that level of care, but still…I’d like to think it would be available.

The world has changed, hasn’t it? For the third time in my adult life. There was the post 9/11 world. Then the post Brexit world. Now we have the post Covid19 world.

If I were going to start a conspiracy theory, who would I blame? In the tradition of most theories, I’d suggest we ‘follow the money’. Who’s going to make a killing out of this? Netflix. Millions of people in self isolation with nothing to do, signing up. And then there’s the smash hit Netflix Original documentary in a years time, with hitherto unknown details about the disease. And there’s a reason Netflix and only Netflix have this information…